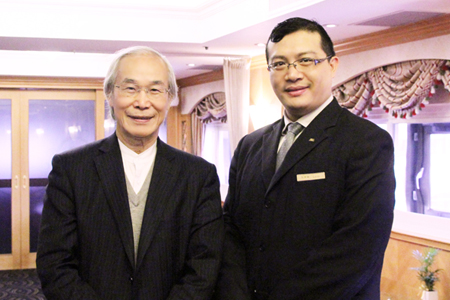 Bian Zushan was the first graduate of the Department of Conducting at the Shanghai Conservatory of Music and the former first place conductor of the Central Ballet Troupe and Chairman of the China Union of Symphonic Orchestra.

Over the past 46 years, Bian Zushan has conducted and played in Chinese and foreign ballets such as Giselle, Swan Lake, Red Detachment of Women and Lin Daiyu. Recently, he has conducted orchestras in USA, Great Britain, Russia, Phillipines  and Switzerland where he has garnered enthusiastic praise and rave reviews. At the age of 76, he is generally seen as a world-class conductor.

After cross-strait restrictions were lifted, Bian Zushan led the Central Ballet Troup in 10 performances of Swan Lake around Taiwan in 1992. This time, he is directing the Taipei Philharmonic Youth Orchestra and Taiwan's outstanding pianist Jun-Jie Yan in a performance of Myaskovsky: Symphony No.27 at Taipei's National Concert Hall.

For these performance dates, Bian Zushan has chosen to stay at Taipei Cosmos Hotel. Sales Manager  Leon Ma  (photo on right) extends a wholeheated welcome. Bian Zushan praises the daily cordial greetings given by hotel personnel which was both memorable and touching.

2016 Teacher Appreciation Party Package
Program Period: Apr. 01~Sep. 30, 2016 This year, show your teachers your highest regard, and thank them in style...