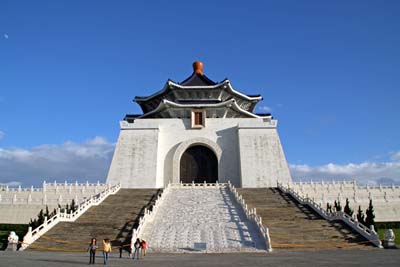 The National Chiang Kai-Shek Memorial Hall sits on a total area of 250,000 square meters. It boasts a 76-meter high main structure, is home to the National Theatre and the National Concert Hall, and has many attractions on its beautiful grounds, including the grand central avenue that leads up to the majestic main hall, the Central Square (or the Freedom Square), the promenade along the park walls, and the Mandarin Gardens (the Guanghua Pond and the Yunhan Pond).

The Memorial Hall itself is a building full of symbolism. For one, its exterior colors of blue and white signify the “blue sky and white sun” of the country’s national symbol. The floor plan of the hall is a perfect square, which is an extension of the meaning of Chiang’s chosen first name – Zhong-Zhen – “square,” or “the righteous.” The hall backs to the east and faces the west, which implies a nationalistic longing for Mainland China. The octagonal roof, taken after the Temple of Heaven in Beijing, embodies the 8 traditional virtues, and the human figure hidden within represents the union of man and heaven. Furthermore, a pair of 89 total granite steps that lead up to the main hall represent Chiang's age at the time of his death; and a plaque of the “imperial road” symbol between the pair of steps, traditionally used only in royal palaces or temples in China, signifies the country’s reverence to one of its biggest national heroes.